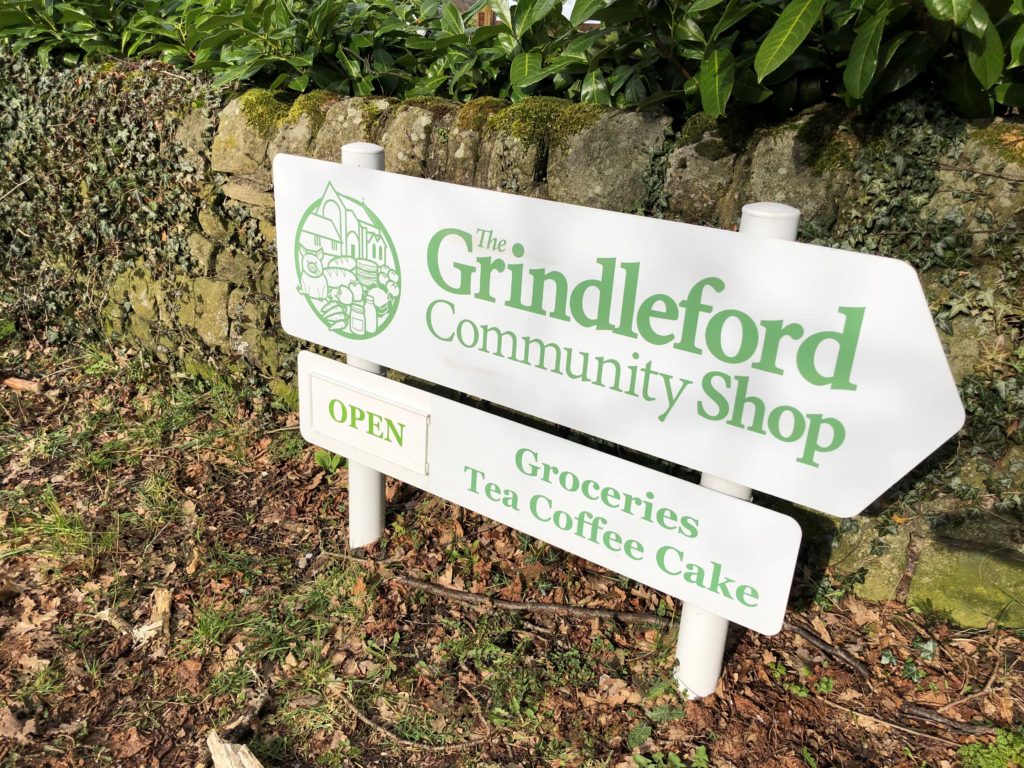 an indication that there is something remarkable going on in the church vestry… and that remarkable thing is a shop owned and run by the community.

Driving through the village it is clear to that this was once a small community with something of a village centre. There were evidently shops – more than one – but over the years as with so many rural communities Grindleford lost its grocery stores and its Post Office – leaving the community to take matters into its own hands. The community shop now operates successfully out of the old vestry of the St Helens, and whilst it is indeed a confined space it is stocked from the floor to the rafters with a wide variety of produce. The shop also offers teas, coffees cakes and snacks (as we learned from the sign!). In the years since it has been in operation the shop has attracted attention of people far and wide, sitting as it does on popular walking and cycling routes through the Peak District and at a handy site for passing motorists.

In 2010 the last local shop closed, and as one resident observed “the village had lost its centre, it had lost its soul.” The idea of a community shop was mooted, and a local meeting held. Initially there were a variety of ideas for how this could happen – and importantly, where it could happen. Ideas varied from the premises of the old shop, to the local sports hall – but none of them were going to work. Despite enthusiasm for the idea of a community shop, the newly formed group seemed stumped as to where it could be located. Eventually the solution came by way of a friendship – a key member of the local group mentioned the dilemma to her friend, a member of the local parochial church council (PCC), and an idea was born: the shop could operate from the church.

The initial reaction of the PCC was mixed, but doubts were overcome with the hope that a community shop might bring more people into the church and generally help the parish. After an inspection by the shop group and encouragement of a local architect it was agreed that the church’s little used vestry would be the right, albeit very small, location for a shop. Approval was given by the PCC and the diocese and the work began installing shelving, counters and all other associated facilities to accommodate a shop in a vestry. Outwardly the church would look unchanged, the areas used for worship not affected and the only difference would be the addition of small signs to direct potential customers to the new facility.

The group got in contact with Plunkett who assisted them to adopt model rules and become an Industrial and Provident Society for community benefit. Shares were offered to the community at £10 each, raising £3,000 to buy the essentials needed. It received a Derbyshire County Council Leader Grant to help kick start the project and opened in June 2014. Today the shop has become an integrated and essential part of village life offering 215 product lines on its shelves. In 2015, it was recognised more widely by winning the Bishop of Derby’s Best New Project award. 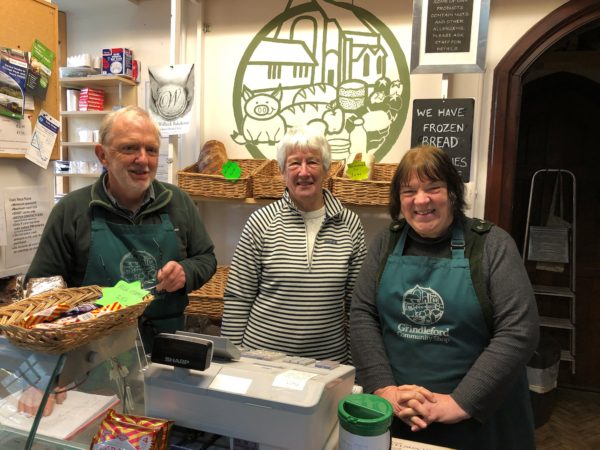 The shop uses the premises free of rent, but pays for its electricity use and makes an annual maintenance contribution to the church. It closes when there are specific events such as funerals and weddings and opens at midday on Sundays after worship. Adrienne Kay, the verge of St Helen’s, said: “It has put the church on the map, it has made the building the hub of the community.”

The next big step for the shop and church is the addition of an extension, which is a joint project. The shop has given the impetus for the extension and applications for more grants, such as one to the Raymond Ross Fund, which will help finance the project. The extension will house a customer toilet, a new kitchen and allow greater space for shop facilities so that more community projects can be run.

The shop, although small, works hard to connect with all members of the community from the elderly to the young, for example local school and pre-school pupils come to the shop in the church twice a week to buy fruit and play in the garden. There are around 30 volunteers now, and the project has help bond the community together, boosting social interaction which organisers said had all but ceased once the old shop closed. Indeed, some of the volunteers met through the shop for the first time. The community shop has been of particular benefit to older people who were not able to get out of the village but can now shop locally. It has also given local retired people a new opportunity to be involved in the life of the community. All of this has meant that Grindleford Community Shop has played an important role in reducing isolation and improving social inclusion and it now aspires to do even more by holding community events such as a memory café – to help local dementia sufferers – when the extension is completed.